There are numerous types of rock and Aquarium stones for sale, the best materials are available in pet stores, online, and even in nature. However, not all aquarium-safe stones are suitable for all aquariums.

So, to begin, let’s take a close look at the types of rock materials you’re likely to encounter when looking for aquascaping materials.

Pieces of slate and shale are available for aquascaping in any pet store or online. They may appear similar at first glance, but there are a few key differences. However, the sedimentary rock shale is composed of clay, quartz, and other minerals. These ingredients were compressed and compacted for millions of years, resulting in shale.

Shale can be black, gray, reddish, or even yellow, depending on mineral content variations. Shale can be easily broken with a soft tap of a hammer. Slate is formed when shale is buried under more sediment for an extended period of time.

Volcanic activity can also result in the formation of slate. Slate, like shale, can vary in color (dark red, gray, and green) or have color streaks. The majority of slate sold for aquariums is gray. Slate is much harder and stronger than shale, and it is commonly used in the manufacture of pool and billiard tables.

Mountain Stone rose to prominence in Takashi Amano’s planted aquariums. The color of the rock ranges from dark to light gray. This stone is used to create rocky landscapes that remind you of a mountain in miniature.

Moreover, it contains calcium carbonate and will increase the hardness and pH of the water.

Mountain Stone is typically used sparingly in aquascapes as a focal point. It also limits the amount of hardness in the water. Many planted aquariums use carbon dioxide fertilization to keep the pH lower during the day.

Some aquarists soak the rock for a few days in dilute hydrochloric (muriatic) acid. This treatment reacts with the carbonates in your aquarium, reducing the amount of carbonate added. This procedure necessitates extreme caution, including the use of gloves and eye protection.

Lava rock is also known as volcanic rock. It is one of the popular aquascaping materials for aquariums. When gasses in magma begin to solidify and harden, lava rock forms. Lava rock is extremely porous. Thousands of pits and pockets formed by gas bubbles can be seen.

This rock can be used in a variety of ways. It’s crushed and used for pathways, baseball field construction, and even fire pits and gas grills. Although it is relatively strong, it can be broken with a hammer. Volcanic rock is available in a variety of colors, including black, brick red, light red, and deep orange. Large lava rock chunks are shaped by sandblasting in the aquarium trade to create arches and rocks with a hole through the center.

Lava rock won’t release carbonate or calcium into the water of the aquarium. It’s great only for all types of freshwater aquariums.

Petrified wood is classified as a fossil. It is formed when trees are buried beneath the sediment. They do not decompose because of a lack of oxygen. However, as groundwater slowly percolates through the sediment, the original wood is replaced by minerals such as silica, calcite, pyrite, and other inorganic minerals such as opal. Petrified wood is formed when the original wood is flushed away and replaced with minerals.

The original tree bark or grain patterns may be visible in the rock. Most petrified wood used in aquarium construction resembles a branch that has been cut into a long or short segment. Typically, the color pattern is gray-black or reddish-orange.

This unusual inert rock is ideal for freshwater aquariums. It will have no effect on the chemistry of the water.

Glass, also known as fire rock, is a man-made material that comes in a variety of colors and sizes. It’s used in landscaping, streamlining, and gas fire pits and fireplaces.

There is a wide range of colors available, from black to turquoise blue. Some aquarium supply stores keep large “chunks” of colored glass on hand. They resemble large gemstones and are used in aquariums as a focal point or accent. Glass rock can be used as a gravel substrate or to add contrast to traditional gravel. This rock will not alter the chemistry of the water.

This natural rock, as the name suggests, is found in Texas and is riddled with holes. Holey rock is made of limestone and will gradually harden and raise the pH of your water. That is why Holey rock is popular among African cichlid enthusiasts.

Moreover, the rock contributes to the water chemistry remaining similar to that of the African Rift lakes. The holes provide excellent hiding spots and escape routes for the fish. They’ll quickly establish their personal hole as a home and defend it from intruders. It also provides security to the cichlids.

Rainbow rocks are typically white and orange, or white with red, black, and green accents. Mexico mines these sedimentary rocks. Sandblasting is sometimes used to create a hole in the center of the rocks.

Although rainbow rock does not appear natural, it is popular among aquarists. It is inert and has no effect on pH, carbonate hardness, or general hardness. Rainbow rock is most commonly seen as an ornament in freshwater aquariums.

Quartzite is formed when quartz sandstone is heated and compressed. Carbonate, Iron oxide, clay, and silica create an attractive streaking pattern. Quartzite is used as a railroad bed material as well as a decorative material for walls and walkways. Polished quartzite is commonly used for kitchen countertops.

Moreover, the natural color patterns in quartzite rock are known by a variety of trade names. It’s also known as Onyx bamboo, Platinum black, and Glacier wave. These are fictitious names given to quartzite color variations. Your aquarium supplier could even come up with their own names.

However, quartzite is suitable for freshwater aquariums and soft water planted tanks.

Some freshwater aquarists prefer plastic resin “rocks” to real rocks. The resin rocks are made of plastic and come in various natural stone colors. They are frequently sold as stackable kits with locking pieces.

The advantage of resin rocks is that they are lightweight, do not pollute the aquarium water, and are simple to remove and clean when necessary.

However, aquascaping is a personal choice. Some aquarists like it bold and colorful like Pebble stone by the best Pebble stone manufacturers. Others go for the subdued, natural look. Smaller rocks are required for smaller aquariums so that everything fits properly. If your aquarium is large, try looking for larger rocks or creating your own rockwork.

Many reef aquarists are starting their aquariums with dry rock. They like the idea of not having to let the rock cure. It makes new aquarium set-up fast and easy and you don’t have to worry about die-offs polluting the water. 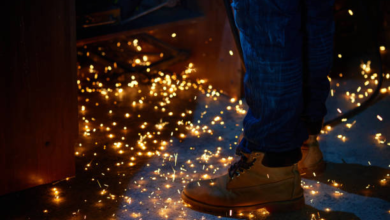 Welding boots – Why are they so important?